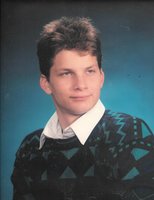 Donald Brent Willis, was born February 22, 1974 in Springfield, Missouri to proud parents Newton and Rosalee Willis of Preston, MO. He passed away in the early morning hours of Tuesday August 27, 2019 at University Hospital in Columbia, MO, at the age of 45 years, six months, and five days.

Brent attended Macks Creek R-V School from K-12th grades and graduated in the class of 1992.  While growing up, Brent loved to play baseball, basketball, hunt, fish, and spend time with his family and friends. He was young when the Lord saved him and was currently a member of Big Niangua Missionary Baptist Church in Roach, MO.

He welcomed his first child, Matthew, born on August 6, 1993, whom he shared with his former spouse, Cassandra (Wilson).

Throughout the years, Brent had worked hard for self-owned local businesses in Camden County, working in construction and HVAC, and had made many acquaintances.  He never knew a stranger and would help anyone he could.

Brent is preceded in death by his maternal grandparents, Millard and Edith North, paternal grandmother, Bessie Willis, and numerous aunts, uncles and cousins.

Burial will be in Pleasant Grove Cemetery at Edith, MO.

In Lieu of flowers, contributions can be made to the family.