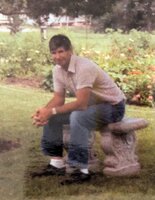 Johnnie served his country proudly in the United States Army.

On September 6, 1958, in Bevier, Missouri, Johnnie was united in marriage to Wilma Drew.  They shared over 63 years of marriage together at the time of his death.

Johnnie was employed as a baker for the Tastee Bread Company for 23 years.  He continued his work with Cargill for another 10 years.  In his spare time, Johnnie loved spending days outdoors, whether he was working around the yard, fishing, or gardening.   He grew beautiful flowers that he enjoyed tending to.

Johnnie was a loving husband and a caring father and grandfather to his children and their families.

He was preceded in death by his parents Lee and Birtie Harris; his brothers, James Harris and Harold Harris; and a sister, Sarah Harrison.

Services will be held at 1:00 pm, Tuesday, March 1, 2022, at Hedges-Scott Funeral Home in Camdenton, Missouri. The family will welcome friends for visitation from 12:00-1:00 pm at the funeral home.