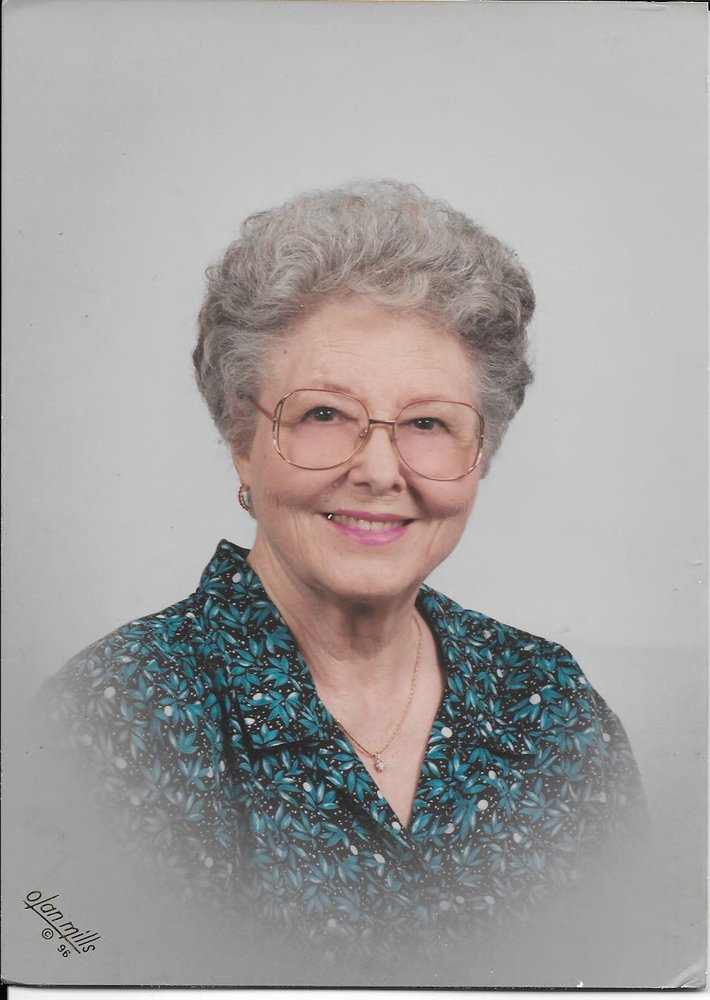 Elsie Mae (Edwards) Blair was born on March 16, 1924 on a farm in Bannister Hollow near Macks Creek, Missouri. She was the third child born to Rome and Rose Edwards. She went home to her Heavenly Father on November 7, 2019 at her home near Camdenton.

Elsie graduated from Macks Creek High School in 1941 as the valedictorian of her class and earned an Associate of Arts degree from what is now Southwest Baptist University.  She taught school at several one-room schoolhouses before teaching at Camdenton.

On August 18, 1948, Elsie married Glen Blair, and to that union four children were born: Lewis, Esther, Emily, and Margaret. Elsie accepted Jesus as her Lord and Savior at a tent revival when she was a child. She loved God and sought to serve him her entire life. She enjoyed music and art and was very gifted in both.

When their children were little, Glen and Elsie founded Ozarkland Enterprises, which grew into several gift shops throughout Missouri. They also owned and operated Blair Distributing, and they were co-owners of Blair Cedar and Novelty Works. Elsie was a Sunday School teacher and choir member at First Baptist Church of Camdenton for many years.  She also served on the Board of Trustees at Southwest Baptist University. She and Glen gave very generously to many charitable organizations, especially Christian ministries.

She was preceded in death by her husband Glen, her daughter Esther, her parents Rome and Rose Edwards, and her brother John and sister Mary. She is survived by her children: Lewis Blair, Emily Mensendiek and husband Tim, Maggie Butterfield and husband James, 11 grandchildren, 10 great-grandchildren, her sisters Norma Houston and Anita Watkins, and her sisters-in-law Mary Lou Edwards, Geanie Blair, and Mary Blair.

Visitation will be held on Sunday, November 10, 3:00-6:00 pm at Hedges-Scott Funeral Home in Camdenton.

Funeral services will be Monday, November 11, at 11:00 am at First Baptist Church of Camdenton with a brief visitation 10:00-11:00 am at the church before the service.

In lieu of flowers, the family asks that donations be made to The Glen and Elsie Blair Scholarship Fund at Southwest Baptist University.