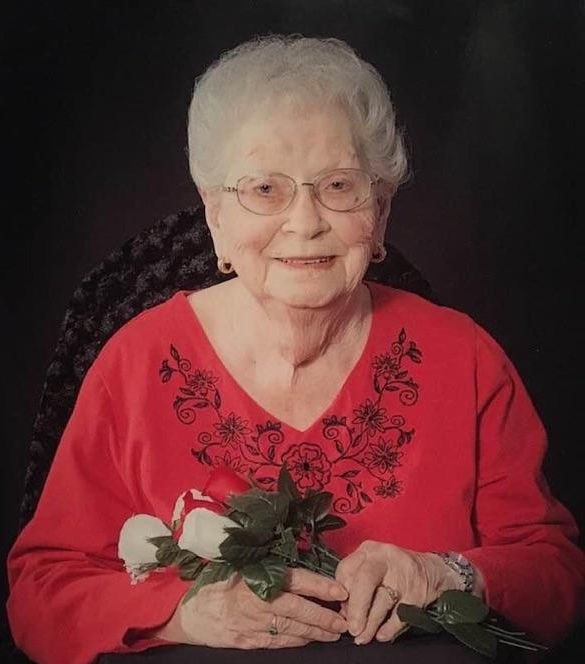 Effa Mae Larson Zenns, age 104, of Roach, Missouri passed away Monday, June 8, 2020 at Laurie Care Center in Laurie, Missouri. Effa was born May 4, 1916 in Almena, Wisconsin. She was the daughter of Louis and Effie (Mays) Larson. She was the youngest of five children. The family settled in Mayville, New York in May 1920. Effa married Edward G. Zenns on June 12, 1937 in Mayville, New York. They resided there until July 1976, when they moved to Westfield, New York. After Edward’s death in January 1980 she moved to Missouri to live near her daughter and her husband, Peggy and Harold Walker. Effa was an expert at doing crossword puzzles. She was also an excellent seamstress and taught sewing and tailoring to others. She was a member of Past Noble Grands of Westfield Rebekah Lodge #575; Past President of the Past Noble Grands Club of Mayville; member of the Three Links Club of Westfield; Past President of the Past Noble Grands Association of Rebekah Districts 2 and 4; served 2 terms as District Deputy President; Past President of the Past District Deputy Presidents Club of Districts 2 and 4; member of the Hakeber Club of Chautauqua County; member of William L. Travis Past Auxiliary of Mayville; member of Westfield Women of the Moose; member of YMCA Senior Citizens Club of Westfield; member of Ripley Senior Citizens Club; member of Retired Senior Volunteer Program; member of Mayville United Methodist Church; and a former member of Chautauqua Rebekah Lodge #529, serving as Noble Grand in 1942 – 1943. Effa is survived by one daughter Margaret (Peggy) Walker and husband Harold of Roach, Missouri, formerly of St. Robert, Missouri; three granddaughters Marcy Anderson and husband Kirk Veirs of Santa Fe, New Mexico, Marcia Anderson of Fairview, Pennsylvania, and Denise Ottaway and husband Randy of Columbus, Ohio; 8 great-grandchildren; 5 great-great-grandchildren; and several nieces and nephews. Effa was preceded in death by her husband Edward Zenns; daughter Marcella Anderson; 3 grandchildren Karen Walker, Lesa Walker, and Mary Ann Anderson; sisters Laura Stroebel, Iva Isrealson, and Edna Dillenback; and brother Albert M. Larson. Graveside services will be held at a date to be announced in Mayville, New York.