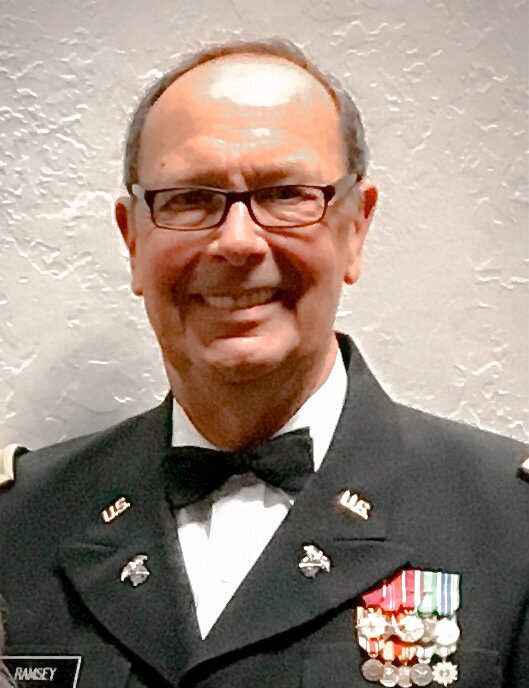 Obituary of Colonel William A. Ramsey

William A. Ramsey (COL Ret. USA), 76, of Leawood, Kansas passed away surrounded by his loving family on Thursday, September 23, 2021 at his lake home in Osage Beach, Missouri after a dignified and courageous battle against his presumptive Agent Orange cancers.

Will was the beloved husband of Andrea Thomas Ramsey (nee Kojm) for fifteen years, sharing a peerless love match. They married at Fort Leavenworth on October 27, 2006.

He was beloved father to Joshua Chamberlain Thomas and Amelia Kennedy Thomas, father to Shelly (Jim) Richardson and Brent Ramsey, grandfather to Braeton and Kyle. He is also survived by a close and loving extended family of brothers and sisters-in-law, cousins, nieces, nephews and their children who live in every corner of the country.

Will was born on March 13,1945 in El Dorado in the Flint Hills, where his great-grandfather first settled after the Civil War. A proud Kansan, Will was graduated from Emporia State University as a member of Sigma Phi Epsilon.  He continued his education, receiving his Masters of Public Administration at the University of Kansas in its City Manager Program.

Will served his country for thirty years in the Army. He was on active duty for four years, including a tour of Vietnam. He was commissioned from Field Artillery Officer Candidate School, and was a graduate of Command and General Staff College, Fort Leavenworth and the Army War College, Carlisle Barracks, Pennsylvania. He served in numerous command positions as an Artillery Officer and Quartermaster. He retired honorably as a Colonel.

Will was an engaged, service-oriented member of his community.  He was a lifetime member of the International City Management Association and American Public Works Association where he served as President. He was a Rotarian in both Olathe and Leawood. He served as Chair of the Emporia State University Alumni Board, and Chair of the Humanities Kansas Board. He served on the Kansas River Region Committee and was a Leawood Planning Commissioner for many years.

Will was preceded in death by his beloved mother Golda Ramsey Abbaticallo and aunt Helen Ramsey James, both strong Kansas ranch women who raised him right.

Will was larger-than-life: tall, broad-shouldered, handsome, with a booming “Colonel” voice and a boisterous laugh.  He could be over-the-top and the life of the party, yet also the sweetest, most gentle and sensitive of men. His sharp wit could diffuse even the tensest situations. He was a brilliant, strategic thinker, preferring to leave the mundane details to others, particularly to his beloved wife, his favorite “First Lieutenant.”

He was an encouraging, thoughtful mentor to many throughout the course of his many careers and community positions.  He was an informed and diligent citizen of the Republic which he dearly loved.

He came from humble beginnings, raised by a single mother schoolteacher in Emporia, Kansas in the 1950s.  He often spoke about living the American Dream.  Because of his own hard work, with support from his loving mother and aunt, he was able to reach literal commanding heights in both his military and public service career.  With his two Masters degrees, he could hold his own in any setting, but also had the most humble and personal of touches, always able to make meaningful connections.

He frequently had a benevolent smile playing around his lips, observing the foibles of his wife and children.  He could ramp it up into a full-on, mischievous Cheshire-cat grin when provoked by his friends or cousins.

He was happiest smoking cigars and drinking a scotch, surveying the expanse of the lake from his tree-house perch; barking orders while driving the boat; watching his storied and iconic KU basketball team; reading his histories and mysteries, and traveling the world with Dre and the kids, sometimes in a C-17, yet again leveraging his military service to take him where he wanted to go.  He was the ultimate, dignified citizen soldier.

He will be laid to rest at Arlington National Cemetery with full honors.  The family asks that any memorial contributions be made to a charity of your choice, reflecting Will’s interests and his many legacies to his community and his country.

Charity of your choice.
Share A Memory
Plant a Tree