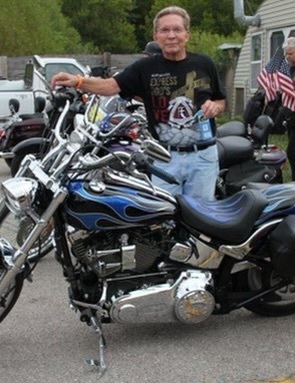 Jay Dean Whitney went to be with the Lord on Tuesday, February 22, 2022.  Jay loved the Lord and would tell anyone who would listen.  He is infamous for his cross pennies and Christian motorcycle shirts.  His heartbeat was Jesus. Jay was born on August 18, 1935, to Harold Dean and Juanita Nell (Stevens) Whitney in Charleston, Illinois in the back of his father’s barbershop.  The family moved between Illinois and Wisconsin to finally settle in Lamar, Colorado, and he graduated from Lamar High School, class of 1953.  Jay’s mom described her son as a boy as always having some big project going on, building a model airplane in the basement, or tearing down a motor and rebuilding it.  As an old man, his final days were still spent working on his model airplanes in his custom-built shop. Jay had an exciting career.  He was an entrepreneur from the start, always turning his ideas into business opportunities.  He owned a hobby shop in Lamar, Colorado before moving to Lake of the Ozarks in 1964 to open a construction company.  Jay built residential homes, golf courses, condominiums, and his own pizzeria.

Jay believed that family was everything.  He had enough love for six marriages and five children.  He was a proud dad and always carried a couple of pictures in his wallet of the family to show everyone he met.  Jay loved to fly model airplanes and owned custom cars and motorcycles. Jay is survived by his wife, Zoe Lynn Whitney; children, Lisa and spouse William Weir, Cory Dean and spouse Laura Whitney, Deana Whitney, and his last effort Katrina Whitney; grandchildren, Jennifer, Shelby, Joclynn, Madeline, Ella, Nolan, and Evelyn; great-grandchildren, Jordin, Jayde, Theo, and Ren. Jay was preceded in death by his parents, his sister Diane Health, and his daughter Christine Dean (Whitney) LaDue.

A Celebration of Life will be held Friday, March 4, 2022 at 11:00 am at Hedges-Scott Funeral Home in Osage Beach, Missouri. The family will welcome friends for visitation from 10:00 to 11:00 am prior to services at the funeral home.