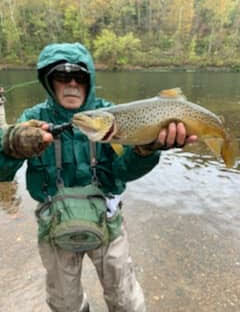 Richard Wayne (“Rick”) Osborn passed away on April 28, 2022, following a 14-month bout with cancer. His passing took place at his home in Camdenton, Missouri with his devoted wife, Sandy, holding his hand.

Rick was born in Lebanon, Missouri on April 26, 1949, the only child of Gilbert Leroy (“Roy”) Osborn and Effie Pauline (née Breedlove) Osborn. Rick spent his entire life in Camdenton, where his father taught him a love of fishing and the Ozarks outdoors.

A talented athlete and lifelong Laker, Rick held records in both discus and shot put by the time he graduated from Camdenton High School in 1967.

Immediately following graduation, Rick enlisted for four years in the U.S. Navy. He served as a communications technician aboard a guided missile destroyer during the Vietnam war and spent his time copying code to track enemy positions. He was honorably discharged.

In the summer of 1972, just out of the service, Rick met his future wife, Sandy Myers, and they married a year later on July 7, 1973. They were blessed with two sons: Brad in 1981 and Kevin in 1983. Rick and Sandy enjoyed nearly 49 years of wedded bliss at the time of his passing.

Rick was well known in the construction industry as a plumbing contractor for newly built hospitals, nursing homes, and schools throughout Missouri. His career spanned 37 years first with Lambirth Plumbing, then with his own company, Rick Osborn Plumbing.

To his friends, Rick was a passionate outdoorsman with a love for trout fishing in Ozarks streams. Rick landed the Missouri State Record Brown Trout on October 3, 2005—a 27-pound, 10-ounce whopper that would remain a state record for several years. In addition to being a Missouri record, this fish was certified the I.G.F.A. Fly Rod World Record Brown Trout in the six-pound Tippet category. Rick’s fish retains a world record to this day.

Rick was as generous a friend as he was a sportsman, always willing to share stories, flies, and fishing tactics with those he met on the creek. When he wasn’t fishing himself or baiting a hook for his wife, Rick’s favorite creekside activity was hanging out at the nearest picnic table and sharing coffee and stories of the day’s catches with other anglers.

Rick professed his faith in Christ at a young age as a member of First Baptist Church in Camdenton. His family clings to the promise of Christ in John 14:3: “And if I go and prepare a place for you, I will come again and will take you to myself, that where I am you may be also.”

A memorial service with full military honors will be held on Tuesday, May 31, 2022, at 1:00 p.m. at the Springfield Veterans Cemetery, 5201 Southwood Road, Springfield, Missouri. Take the Evans Road Exit off Highway 65.