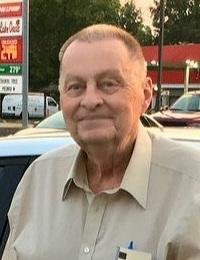 Please share a memory of Hudson to include in a keepsake book for family and friends.
View Tribute Book

They lived in an adorable farmhouse on the edge of town, which included barns, livestock buildings, cellars, and goose feather mattresses. Hudson loved living on a farm and was very good at all aspects of farm life. However, to this day, he hated eating turkey. Every year his parents and him would raise, kill, and dress 100’s of turkeys to sell for Thanksgiving, and so he asked we never fix him turkey.

Hudson also loved animals (except turkeys) and he and Marion took in many strays, including a litter of 5 kittens someone was going to dispose of, a 3 legged dog, and he helped a hawk that couldn’t fly out of his backyard due to heat stroke from many 100 degree days.

On June 18, 1960, he married Marion Louise Raley, a beloved sister from the Perry, Iowa congregation. She was the love of his life and it was rare to see a photo or them in person where they weren’t holding hands. He often spoke of his favorite vacation to Kauai, Hawaii to celebrate their 40th wedding anniversary. It truly says a lot of how much they loved each other when you see a couple married 40 years, walking on the beach and still holding hands. On July 17, 2017, he was holding her hand as she took her last breath. They were married 57 years.

Hudson served as an Elder in the Camdenton Congregation of Jehovah’s Witnesses, and he considered it a blessing to do anything he could for Jehovah and all his friends in the Kingdom Hall.

Hudson died on Wednesday, December 21, 2022. He was preceded in death by his parents, his wife, his sister Patricia Norbom, and his great-grandson Wyatt.

He will be greatly missed by all until the words of Acts 24:15 comes true… “And I have hope toward God… that there is going to be a Resurrection of both the righteous and the unrighteous.”

A celebration of life will be held Sunday, January 1, 2023 at 2:00 pm at the Camdenton Congregation of Jehovah’s Witnesses.