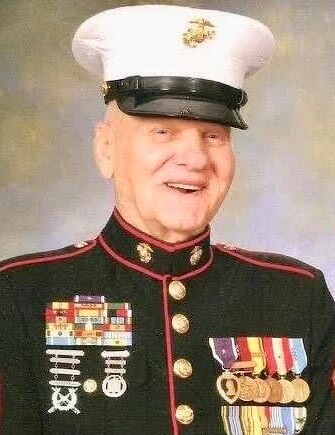 Please share a memory of Billy to include in a keepsake book for family and friends.
View Tribute Book

Billy was born October 19, 1930 in Ziegler, Illinois, the son of George and Wava Marie (East) Sanders.

On April 21, 1951, Billy was united in marriage to Elizabeth Carter in Ziegler, Illinois. They shared 71 years together at the time of her passing on October 10, 2022.

Billy proudly served his country for 30 years in the United States Marine Corps. He was a loyal husband, father, grandfather, and family man. He enjoyed spending his time hunting and fishing.

Billy was preceded in death by his wife Elizabeth Sanders and parents George and Wava Sanders.

Funeral services will be held Friday, January 27, 2023 at 11:30 am at Hedges-Scott Funeral Home in Osage Beach, Missouri. The family will welcome friends for visitation from 10:30 – 11:30 am prior to services at the funeral home.

Memorial donations are suggested to K9 for Warriors at https://k9sforwarriors.org/